by Keke
in Chronicles, Concerts
2
FacebookTwitterEmail

In June 2017 before being postponed in March 2018, we had to be patient to see the tour start. I was also not sure you can attend, my Parisian life is about to expire ...

The appointment is given to the Folies Bergère, barely room to fill despite the proliferation of promotional ticketing deals. I do not understand what public disenchantment toward Shy'm which for me is one of the most deserving artists of the new generation. The music market and mysteries 🤷‍️. It is almost 21h when the lights go out ...

It is " Woman of color " who has the difficult task of opening the evening. The curtain rises and we find Shy'm wearing a hooded bathrobe, ready to step into the ring ! It is accompanied by 4 musicians. The decor is summary : some neon and light reflectors are placed here and there to fill the space history. We clearly feel the lack of budget. She followed the excellent " I know ". His energy is infectious and the atmosphere suffers ! Musically : live arrangements are really nice : it begins well !

She takes off her robe to reveal a sexy outfit in black leather 🔥 dropped Hair, it rages on " To take some fresh air ". Unfortunately for us, his voice is covered by the support band. the One that distinguishes the verses and yet, it is only a thin voice net in mixed ... She welcomes us before starting "Hero". Here again, difficult to hear anything. Apart from that disappointment in sound, I still have to admit that I am delighted to find it on stage!

For the moment, I love the setlist and continuous faultless also with " We must live " I'm also a fan. She puts all her energy there ! It's strange to see it evolve only when we are used to see her surrounded by an army of dancers and scenery. I would have liked more light worked games, history that the songs are dressed with very different atmospheres each other. Christophe Willem it was perfectly happened to last year's Stars such (Christophe Willem : Campe For Stars - The Stars, Paris (2017)).

The public is visit "Hi Bastard", one of my favorite songs ❤. She then unleashed on " Really ", which for me is one of the best evening's benefit! I invite you to discover in video at the end of the article. Spectators finally stand up to dance « Work It ».

She followed the sequence that begins with emotion "If You Still Love Me". Seated on a stool at center stage, she was accompanied by dancer Zack Benitez to contemporary ballet duet. The voice is powerful and assured : finally, we hear ! She then chooses to resume " Stay up late " Jean-Jacques Goldman, before moving on " They're making fun of us " and " Again " coming close this parenthesis (more or less) acoustic.

After a short break, introducing "Victory" resonates in the room and neon that we noticed at the beginning of the show finally light. It must be recognized that it has a sacred string of hits under his belt 👍. The suite is played with "Chameleon" which I think is one of the best songs of his repertoire. It was already a highlight of "Paradoxical Tour" in 2015. It continues with "On s'en" and « Madinina » on which she invites her father, Harry Marthe, join in. Their complicity is nice to see. I also suggest you to discover this video sequence at the end of the article. She then set his brothers and sisters on stage to complete the family portrait.

The concert is resumed with « Mayday » who enjoys a nice highlighting : the neon lights are finally put to use in order to create a unique atmosphere. Part of Kid Ink is replaced by a break in the battery which makes the atmosphere in the room. Transition occurs with " The greenhouse effect ". It's a real live title, it works super well ! I loved. She followed with "Turn", piece of my favorite sidekick 😁 She asked the audience to get up to dance. This is one of the highlights of the concert !

She explains that happens near the end of the evening, there are only two songs and that we must give everything! One hears the introduction of " So what ". obviously, big atmosphere on the piece : I would have liked her to do the pleasure last a little longer. Spectators will give heart to joy. She chose the symbolic " On the road " to close the concert. I must confess that I hardly recognize the song instantly 😆. The curtain then closes to reopen a few seconds later so we can applaud Shy'm and his band one last time.

I'm glad I could attend this tour before leaving. Shy'm is one of my favorite artists on stage and I took a real pleasure to see her again. I expected a clean show in this and I have not been disappointed, except perhaps by mixing and excessive presence of the support strips. It kept us from good to hear his voice. She had no difficulty to take the stage without the usual Barnum, I found comfortable.

She was beautiful, energetic, perhaps less talkative than usual, while the environment lent itself more, while remaining still warm. It is an almost faultless at the setlist : she clearly a discography that holds up ! I would have liked to hear "Where Art thou? », from his latest album : I'm actually quite surprised that it does not incorporate. I want him back on stage with a real show. Hoping it does not yield to the ease by laying us an album of covers by then.

We left with photos and entertainment videos, it's not great art, I recognize him, but it will give you a little preview of the tour! Feel free to leave your comments, here or on social networks : Facebook, Twitter and Instagram and discover my previous chronicles his tours here : #Shy&rsquo;m. I still have a concert in Paris and then go to the next level ... Stay tuned!

Also available in video Dailymotion : We must live (Extract) – hi Bastard (Extract) – Really – If You Still Love Me – Madinina – The greenhouse effect (Extract) 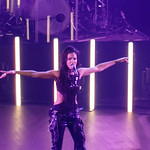 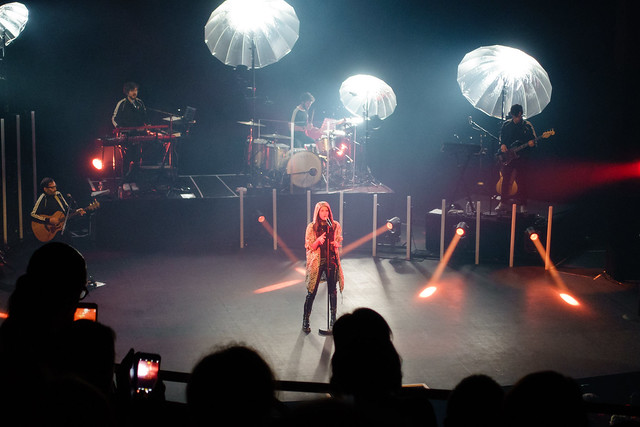 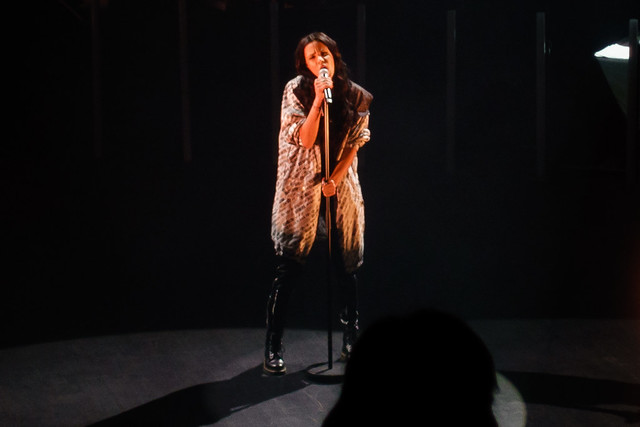 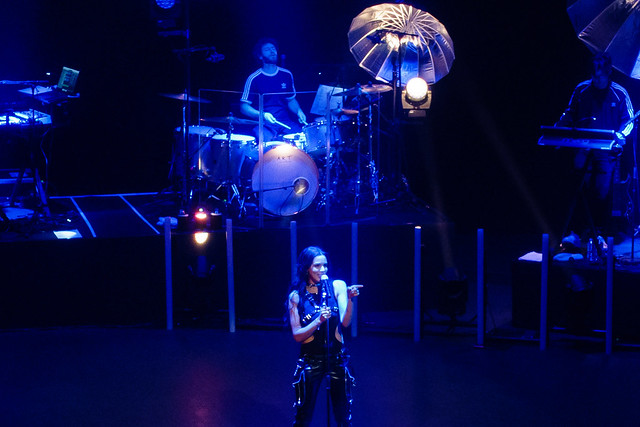 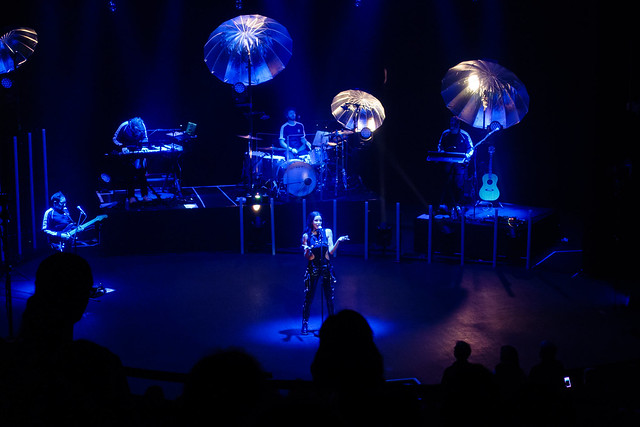 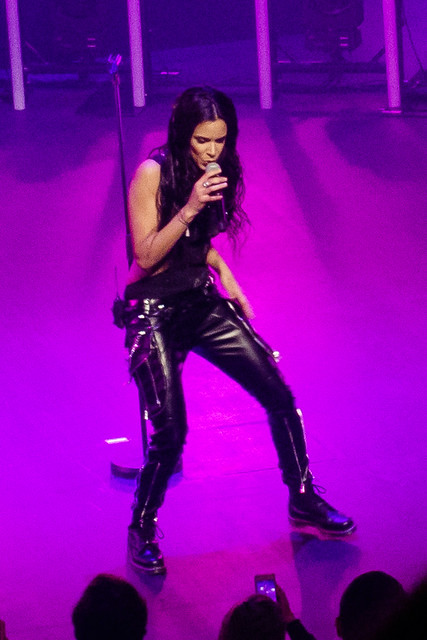 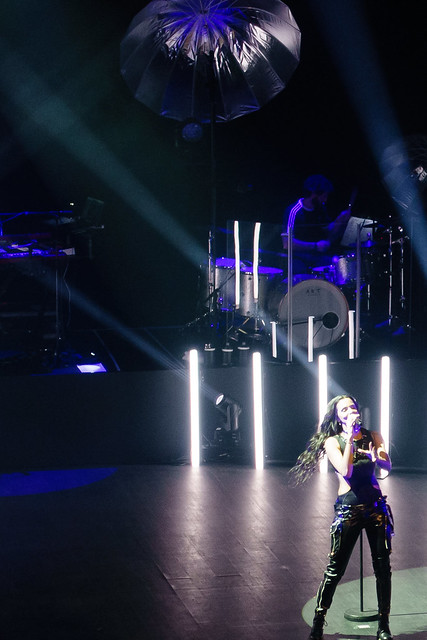 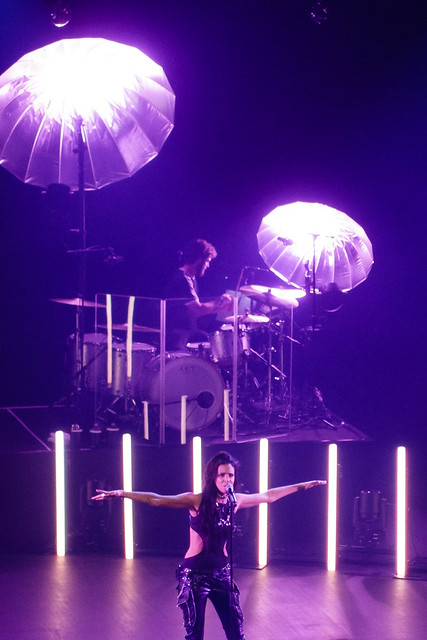 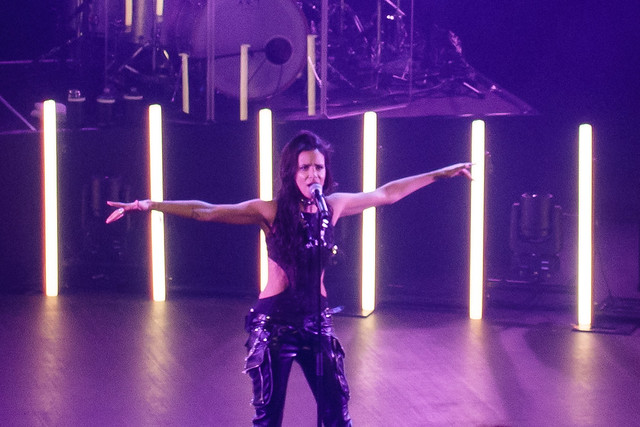 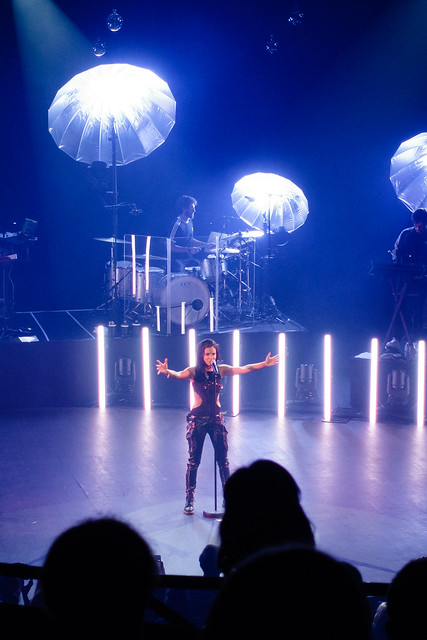 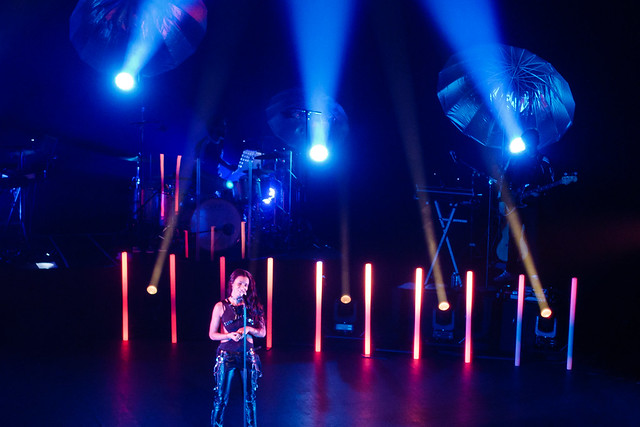 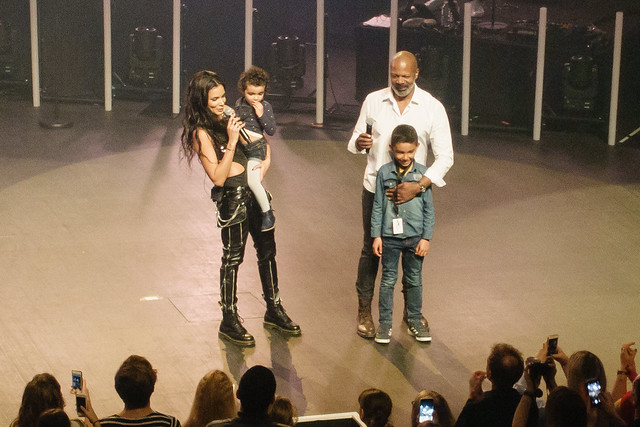 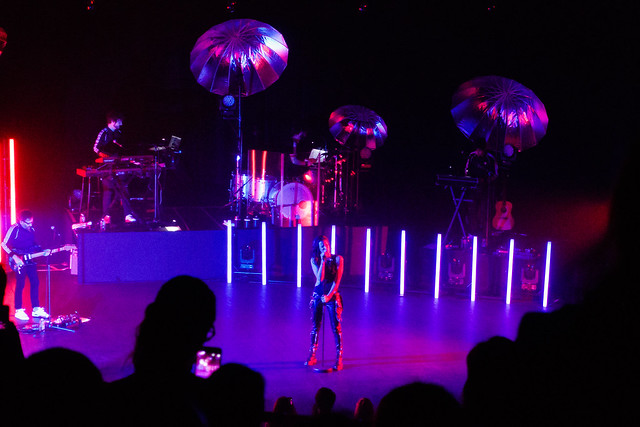 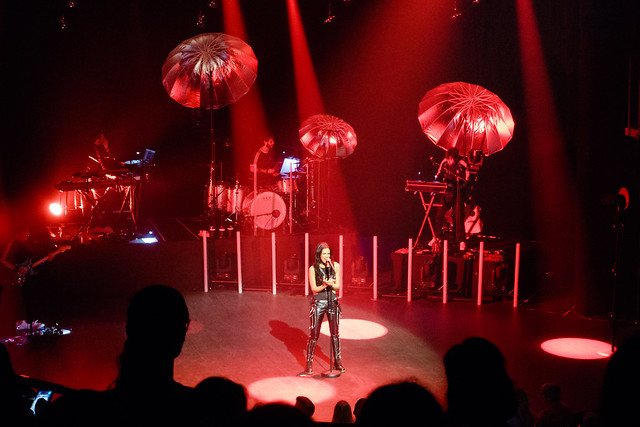 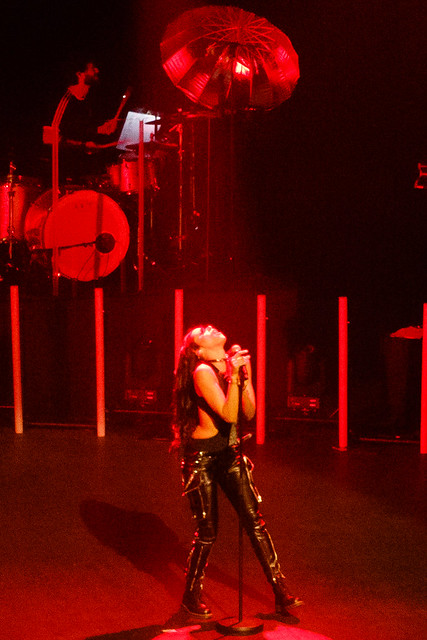 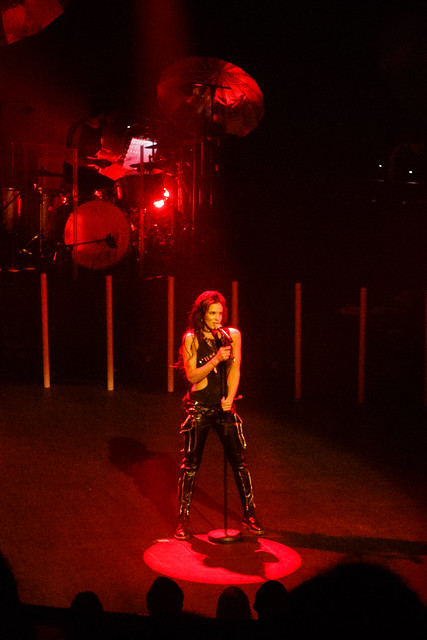 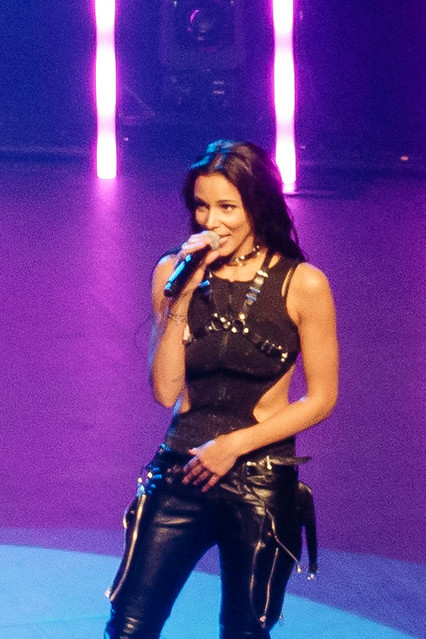 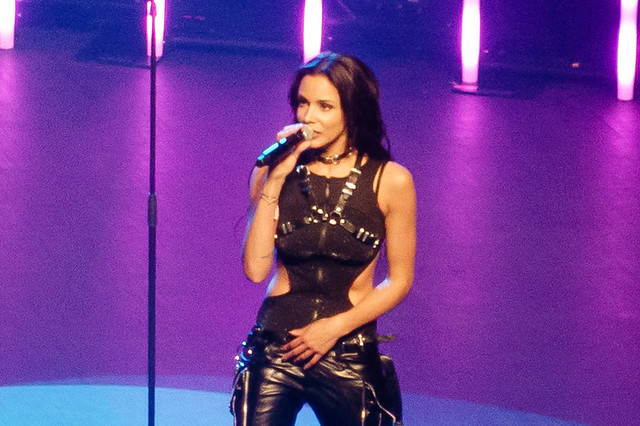 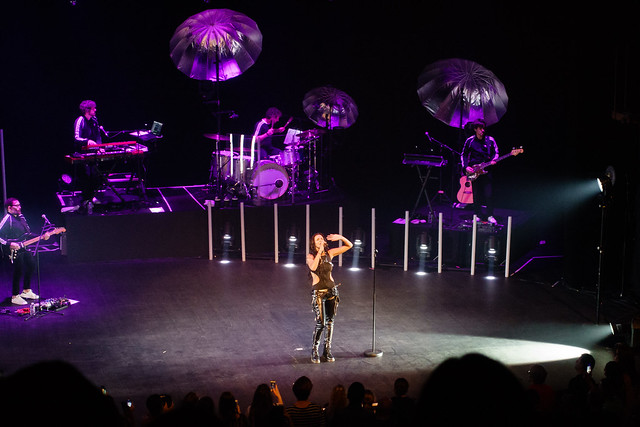 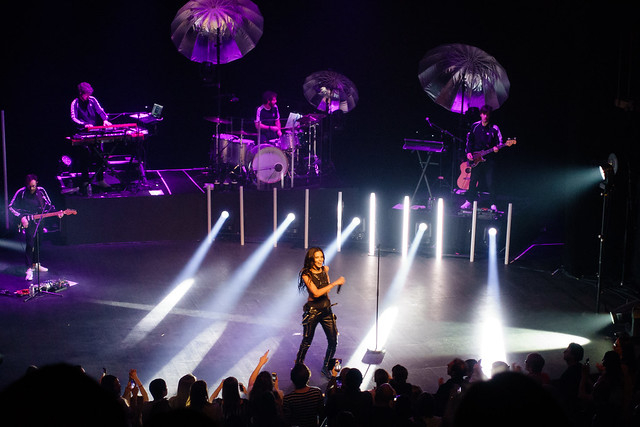 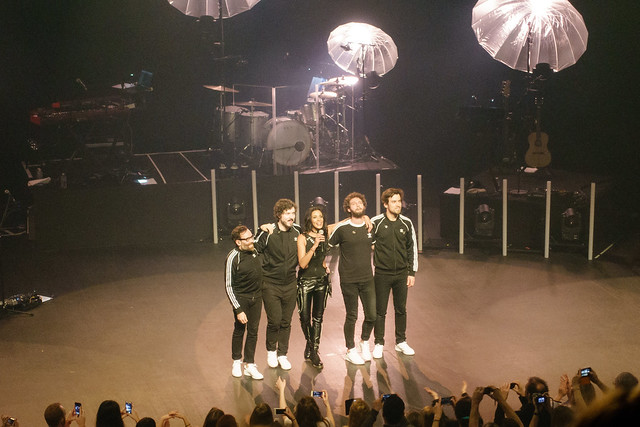