by Keke
in Chronicles, Concerts
7
FacebookTwitterEmail 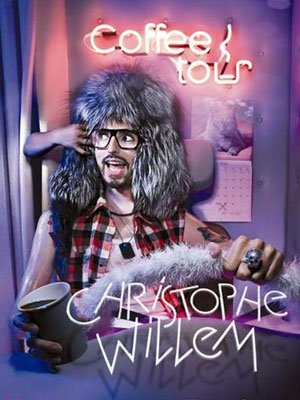 Habitually, I let a few days to write the minutes of a concert because I like to have a little step back from what I saw ... Sadly, between Cannes, exams, Black Eyed Peas concerts and Lady Gaga at Bercy whose columns are available here : The Black Eyed Peas : The E.N.D. World Tour – Bercy, Paris (2010) and Lady Gaga : The Monster Ball Tour – Bercy, Paris (2010) - I have a little faster pace if I want to remember all ! So ! Christophe Willem and his « Coffee Tour » landed in Montpellier ! To be honest, before going to this concert, I had never heard his first album "Inventory" – except the recesses singles, but having enjoyed the second, "Caffeine", I did not hesitate a second to take my place when the tour was announced, I had heard only good live !

So here I left for a few hours waiting in front of the Zenith Sud in Montpellier in 15 May 2010 - hours that allowed me to discover the "fans" of Christopher ! So contrary to what one might think, this is not necessarily young who make up the majority of the public, oddly quite the contrary ... You see the housewife under 50 years ? Well, there it is, it, it is the public Christophe Willem ! Some even follow the entire tour - their subjects favorite conversations : Christophe shoes - that 'a priori' "Is not so much walk with, seen as soles for wear ". Hum. Short, short, short ... after some bickering between household to see which will be closest to the stage and after the first part of Skye - I wait patiently the concert and there, is the drama !

Fans are, for the majority, the most disrespectful people exist - and "housewives" (I hope they read this report) are not left. Imagine : the introduction begins, This is a video I could absolutely tell you anything, I remember a truck ... all, because the woman who was behind me (the big fifty - to show the intelligence of the thing) decided she could ME TAPER (Yes, Yes, it's still the first time I get shots in a concert) because I "stopped up" the sight of his daughter - then I'm not a monster I assure you, there was room everywhere, it could very easily shift and this is what I recommended him to do very nicely - the other bitch screaming like never, my neighbor (that was even bigger than me) therefore advised me not to pay attention to him and that's what I did ! But to prove to you like people are morons : the girl remained whole concert behind me and my neighbor, knowing that both of us were to properly measure 4m ! eh yes, you read correctly, at least 4 !

I was still a bit in the dispute when Christopher arrived on stage suspended after a winch « Berlin » – the concentration was hard to find ! Short, it screams, it screams - not the bitch eh, the rest of the public ! This song is really nice, well I know it's one of my favorite songs of the album. It connects directly with " Over all ", here again, this is pretty good - I knew at that moment that I would have a good time ! Behind him, a giant screen broadcasts relatively simple images, for the entire first table is the word « Coffee Tour » in lights that shows the scene - but it's a good effort of trying the American show (Finally ... the American poor what !), the play of light are really nice too : I think it gives each security a particular atmosphere well ! A little hello and he starts his little blah saying he does not like to see the seats in the room (and yes, pit sitting surprise !) : he says he is happy to see all up and "It shows that it is very annoying that there are seats". It makes little jokes, it's more fun and it really gives the impression of being happy to be here ! Good after all ! The concert continues « Kiss The Bride », a title of the first album that I had not had that version of the household outside the room ! The new re-orchestration was absolutely brilliant - I hope there will be a live DVD, as the album version is bland next (eh yes, I listened for) ! A moment very rock ! First ride with « Fragile » in a bluish atmosphere ... this is not the way I prefer, but it must be some slow songs too eh !

First interlude of music that makes me think « Die Another Day » Madonna - on stage, there is nothing and people turn, I do not understand why until you see two singers dressed with large shiny black capes, Such female boxers, coming down the steps of stairs ... Boxing ... Die Another Day ... Madonnesque the inspiration is there ! And it will be confirmed later in the evening ! "Man In Black" is the title that follows. Then Christopher announces that "Everyone is forced to sing, I check " the following title ... uh ... how do we do when we do not know the song ? Haha ! It is « Safe Text » a new mid Version- barrel organ, me- symphony, it is a bit strange, but finally, it makes great ! Everyone seems to know it anyway ! I have mimed the words, because I was still in front of him, I did not want him to take me to task ! Lol ! "You Te Fools Us", repeated in chorus with the audience and two daughters of the public who had the chance to show on stage and make their show a few dance steps at the con !

Second interlude of the evening, absolutely pumped about « Sorry (Remix) » Madonna Confessions Tour (cf. Madonna : Confessions Tour - Bercy, Paris (2006)) – with in addition to the extracts of« Erotica » of that Madge sung in the heart of the song ... What you ask ? The only thing is that supposed to stink ass, but it has a vague smell finally ! Short, so it's a mix "Bomb Anatomical / Erotica » that comes after it, it's nice ... but not extraordinary, I did not really like that title "Anatomic Bomb"… in any case, what is certain is that this is the picture 'sex' !! After the jet flames to this screen by the French adaptation of « Sensitized » (a title of Kylie Minogue) Christopher chains whip in hand - I absolutely love this title, but I still prefer when it's Kylie who sings ! ha ha ! And my first disappointment of the evening with the title « Coffee », is the title that made me buy the album when it came out, and finally, it takes no scale live, it is rather the opposite - it loses its charm ! 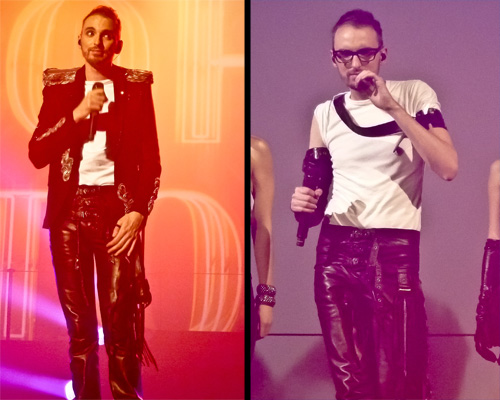 Long spiritual interlude to bring "Between Us And The Sun"French adaptation of ... « State Of Grace » Britney Spears ... We never change eh ? Good, either she or her, that title never fascinated me - except in French, the lyrics are really what kitsch ... It is then the magnificent tower " Jacques said " Christopher interpreter in a kind of white cloth cube which are projected from many points of light - it's pretty ! I will pass quickly over the slow "Yoghurt And Sink" – written by Zazie - a real void this title ... Fortunately, the drum started again at the end of the title for « Trash », duet with Skye (remember, the first part), this is a title that moves well - which means nothing, but makes exercise ! Behind me ... it sang loudly to "Twoiiaaach", "Twoiiaaach" ! ha ha ! It made me laugh throughout the song, I really had a good time with it !

So after the resumption of the title with the public ("Twoiiaaach") - Christopher tells us with a big smile "The next song is a sad song and it's impossible to sing it seriously" – So after a light laugh, instead the sad title, we take back « Trash » once again, except that final, they make a depressing Version ; I think the shot must be provided every night, or I am wrong language ! Should zieuter on YouTube ! Short, Title sad is « Why » Annie Lennox taken duet with Skye always. She sings that little good ! Black scene ! And with a new version of " What luck " Christopher returns to the stage, it's ultra-funky, it's great fun ! I loved this version - how disappointed when I listened to the version then Album ! It smells like the last table ... " Requirement (Remix) » – which is ultimately my favorite title "Caffeine" where Christopher descends into the pit to sing at the heart of public, it is madness in the room - it sways like a sick ! Back on stage and after a small microphone problem quickly resolved, he moves on « Heartbox » in a remixed version too small and there ... blah strange with the technical team to say that in fact, he preferred to reverse the two titles of the end, so this is a remix " Double-dealing " (you will find the video at end of article) that will finish unofficially concert ! Surely the best atmosphere of the evening with confetti and everything ! It is so fallen that we could pick up a handful ! I found everywhere in my apartment for a week ! On the other hand, I could not help thinking the preferred recovery Corkiette "When I grow j'serai alcooolique ! » Thank you for this moment rotten ! MDR !

After the madness of this " Double-dealing ", this is a point on "If I fell ' which will conclude definitively concert ... So overall, I loved - I found the setting warm and bright scene, which gives a beautiful color to the album on stage. The voice, the presence, there is nothing to say about it, it's perfect ! The choice of titles for me - since the vast majority of these are extracts "Caffeine". Too bad the audience does not follow in its efforts to offer something a little more ambitious. But OK, tastes and colors ! In any case, I would not hesitate to return to him at a future tour, I had a lot of fun (except for the shots that I took on the intro course !), it is rather funny on stage and relatively bright, was at least the impression that he does not debit the same text every night - but it, it remains to be seen ! Lol !

We end the article with photo gallery and especially, the final video of the remix " Double-dealing ", also he moves his big bitch ass when he wants ! Haha ! I also suggest you to join me on Facebook, Twitter and Instagram to discover many other chronic concert, in particular that of the next tour : Christophe Willem : Sessions – Olympia, Paris (2012). 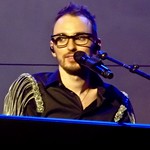 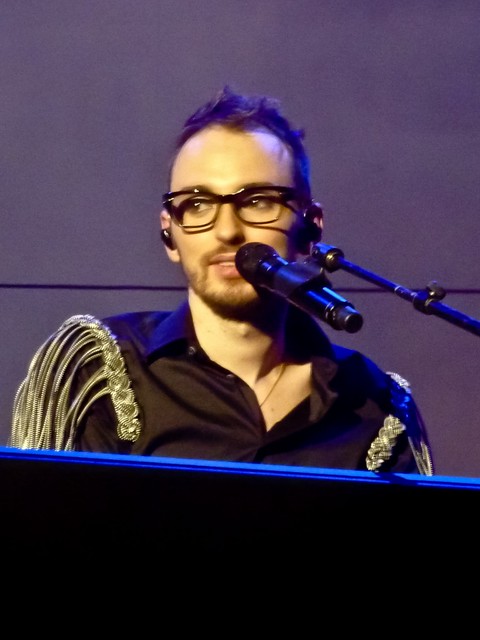 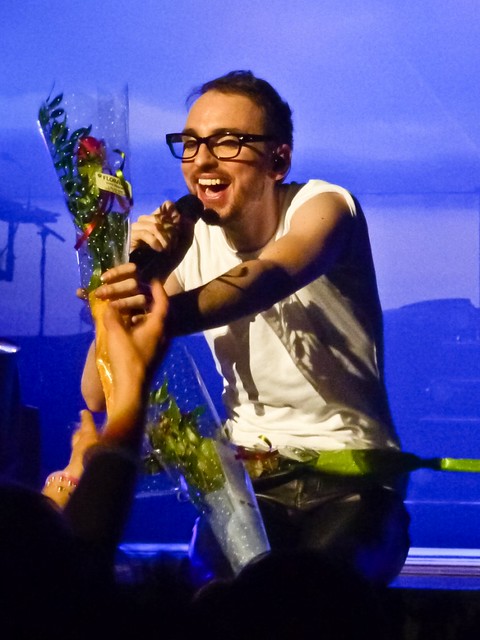 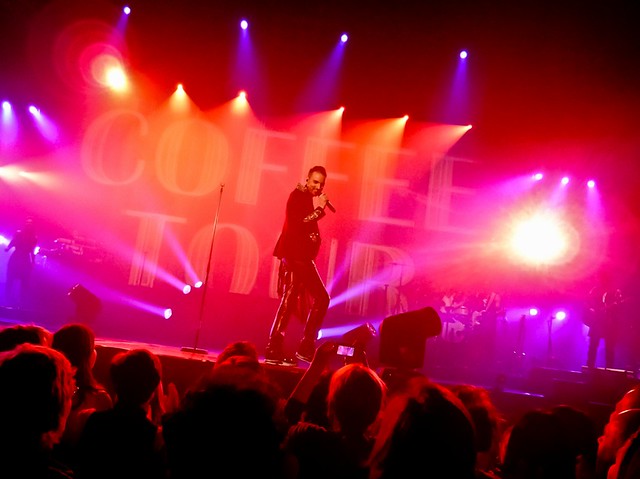 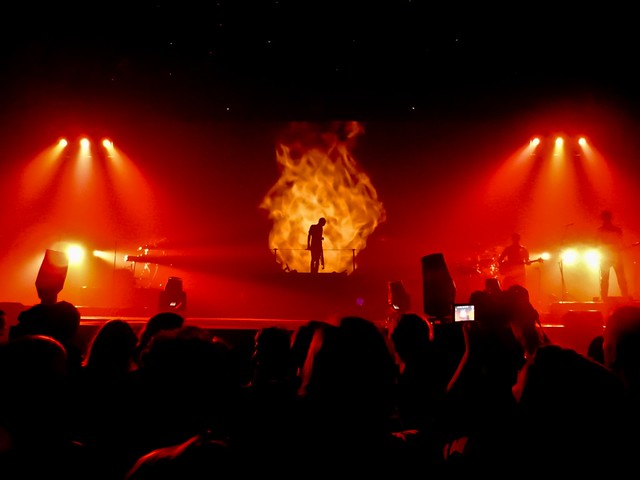 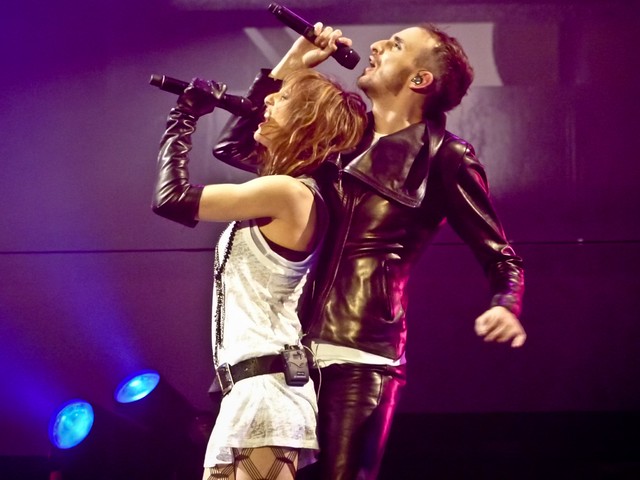 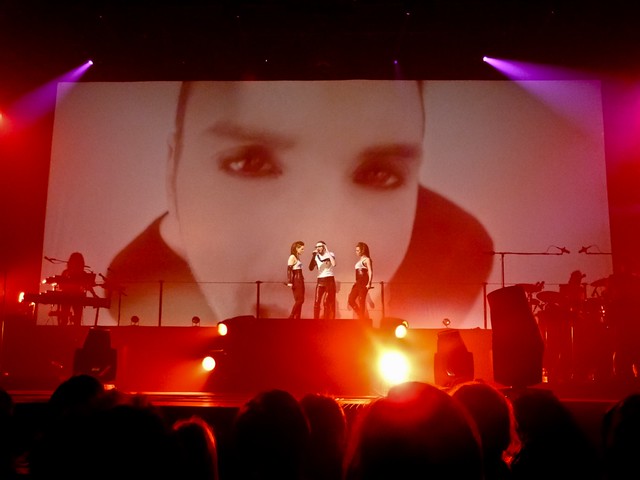 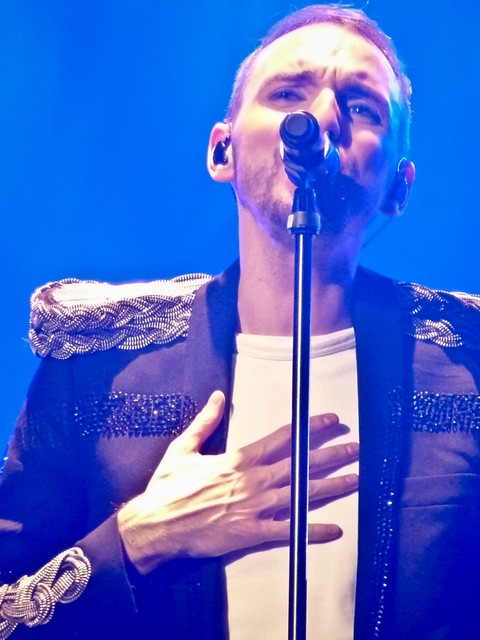 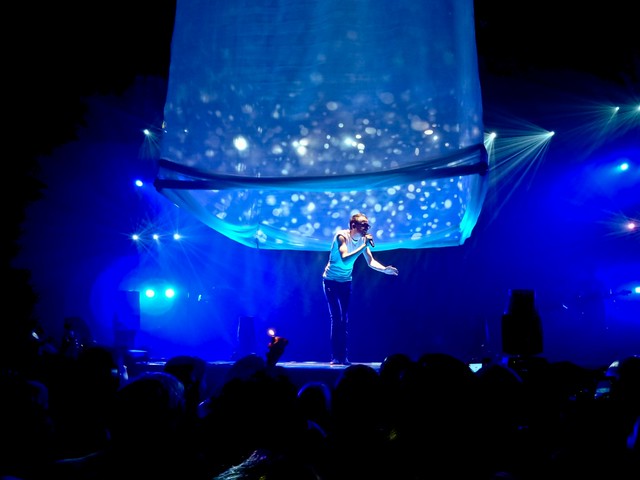 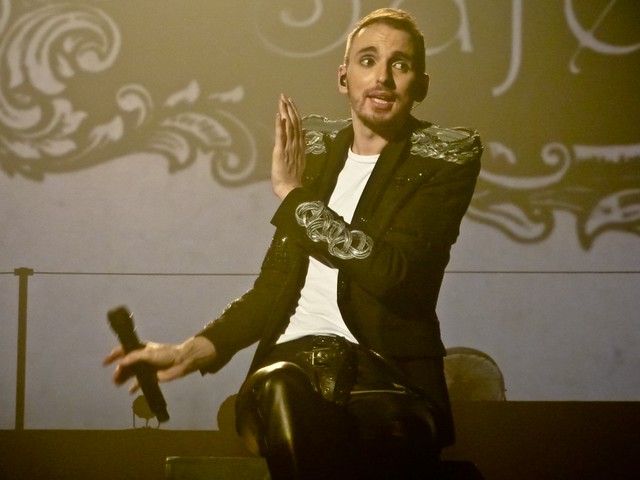 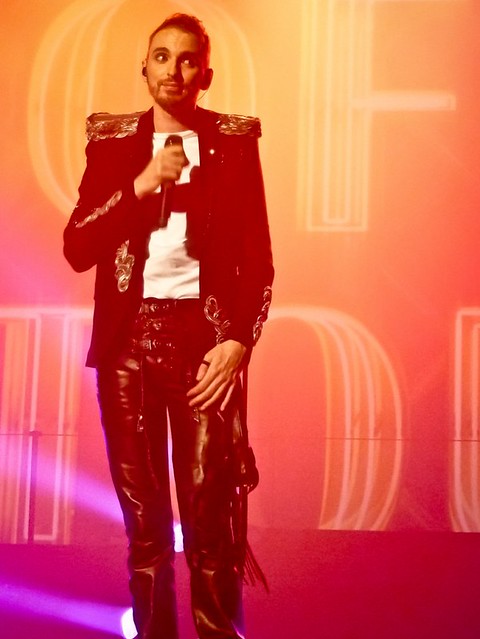 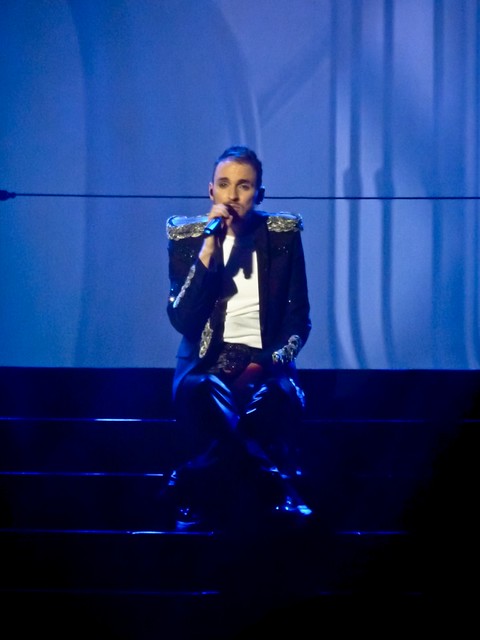 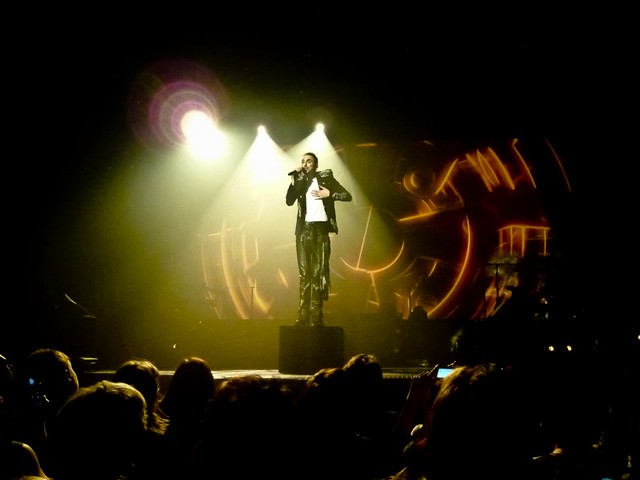 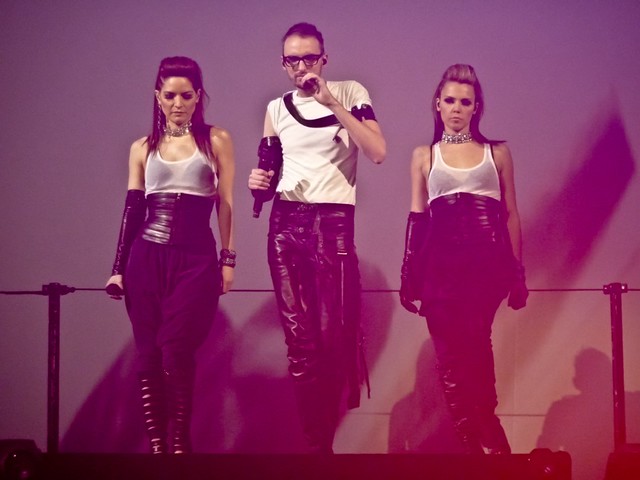 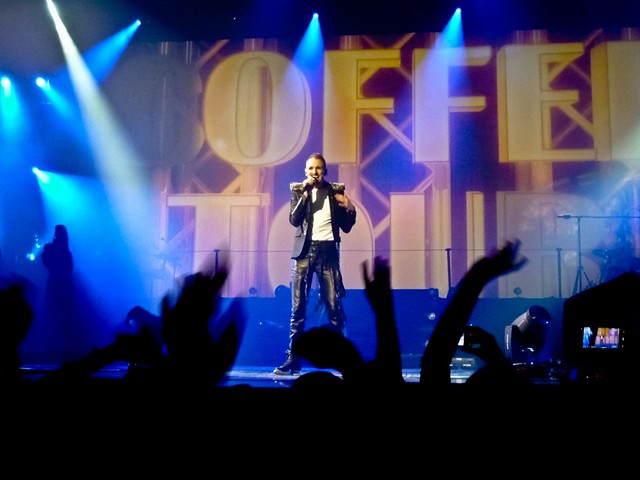 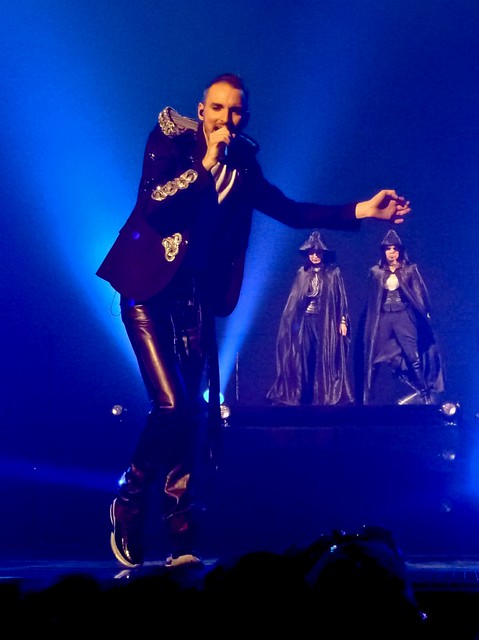 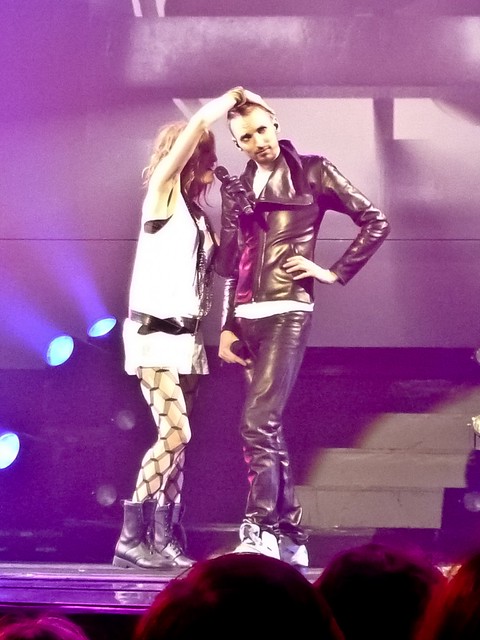 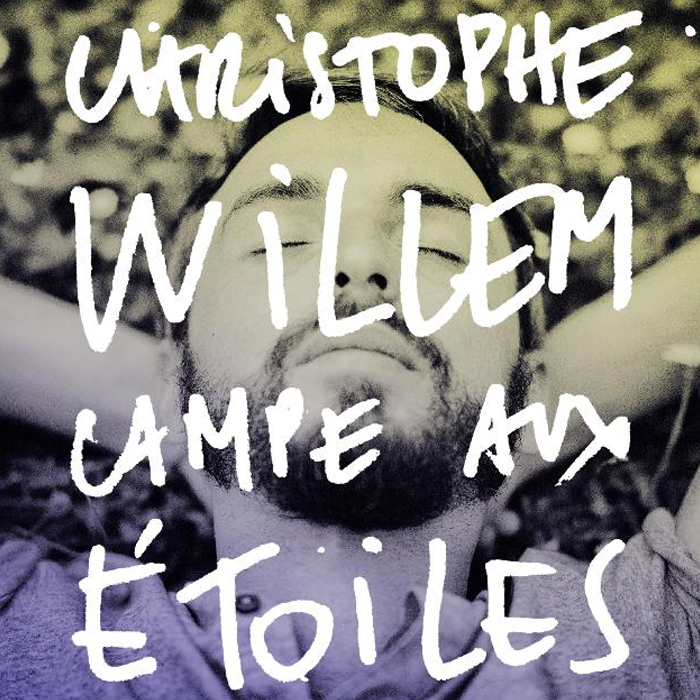 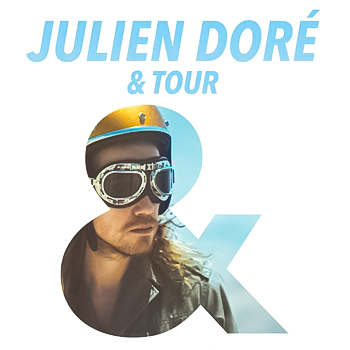 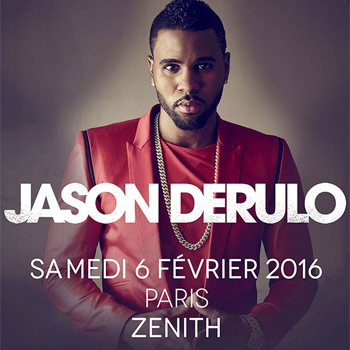 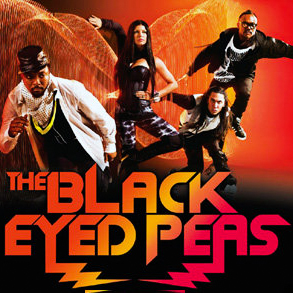